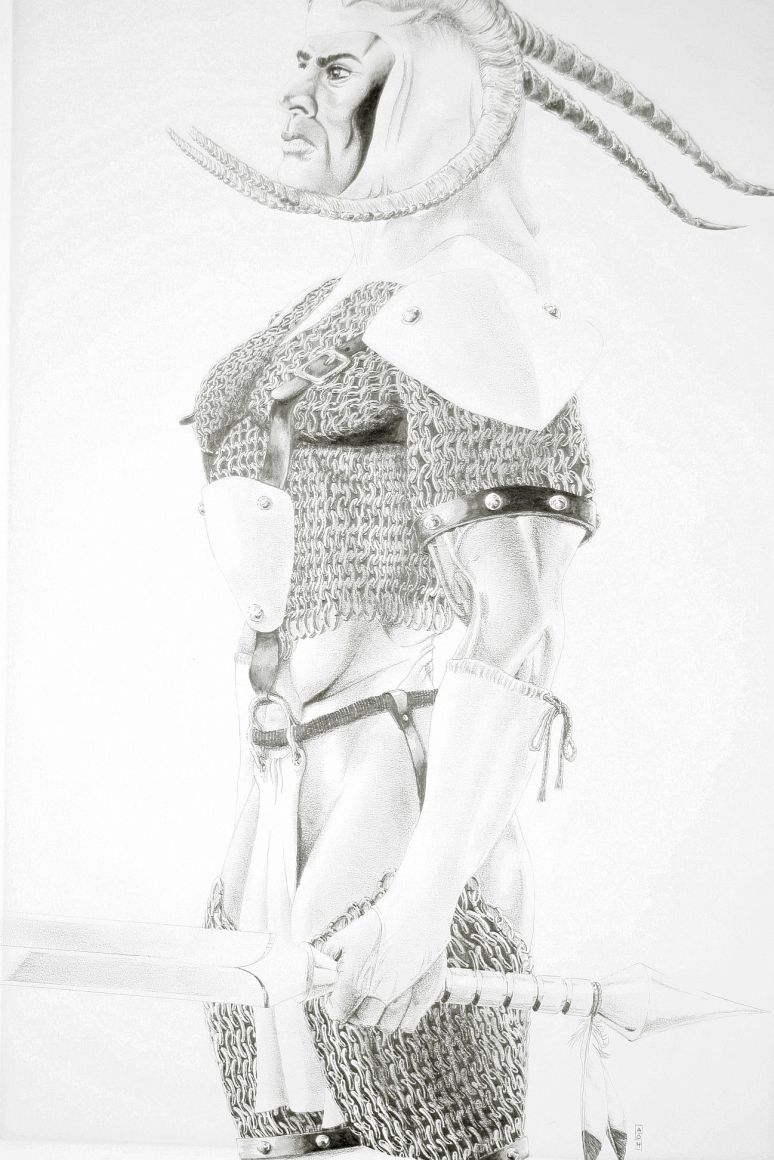 I don’t just sell my art to make profit; it’s a significant means of getting it out of my sight. I can be extremely critical of my work. I may paint, draw or photograph something that I’m reasonably satisfied with but I usually have to put it away if I’m not selling it or else it won’t be long before I start finding fault with it, and want to destroy it because I know that I can do better. “The Soldier” is an exception. It’s the one piece that I’ve done that I have kept for myself for years, and still proudly display it in my home. I’ve never even made prints off of it.

I rented it out once to a firm that needed art to decorate their office for a while, and I nearly sold it to someone else shortly thereafter but I was glad when the prospective collector didn’t have enough for it.

As a kid in the 80’s I knew many who loved to play role playing games like Dragon Lance. I played a few times but could never get into it like they did. They liked to buy those neat little pewter fantasy figurines and paint them to represent their gaming alter egos. Sometimes they would paint their figure or pay me to. They really enjoyed it when they’d get me to draw the characters that they’ve taken on.

The last time I played, I was some persona that a couple friends made up for me. He was human, tall, muscle-bound–of course, he’s a fantasy character, had a Scandinavian/European-style broadsword, a double-headed battle-axe, a helmet with horns, a shield and chainmaille armour. That was the general description. I was told to basically make the character my own. Do as I feel with him. One of the guys wanted to call him Glynnis. I settled on the name Canteor. Where either stupid name really came from, I do not know.

My friends thought it would be cool to have me draw our characters. I guess it heightened the pleasure of their gaming experience. Knowing that I have a knack for putting my own artistic expression into images where I am given a sufficient amount of creative latitude, they were eager to see what I would come up with. The reactions of the finished pencil sketches were varied. They liked theirs but there was something about Canteor that caused them to not rave so quickly.

They liked how I styled the chainmaille armour. They really liked the helmet. Best of all for them were the weapons. What caught them off guard, however was that Canteor was a black man, and wore knee-high leopard-skin boots with a seemingly soft sole. From my own creativity, my character wound up looking like a cross between a Zulu or Xhosa warrior crossed with Conan the Barbarian and a Norman knight. My buddies were two white kids growing up in a nearly completely Caucasian town who envisioned a white hero for me; a black kid, to play in Dragon Lance adventures. Is that amusing, or what?

One of my friends clearly wanted to say something but was clearly afraid to speak his mind. I suspect out of fear of insulting me. The other fully expressed that it never dawned on him that I would make Canteor black. The other one mused in agreement, still obviously nervous. It dawned on them that it made sense, nevertheless, and they liked it. It may have helped that I didn’t act as though I was offended that they never considered a black man as a hero. 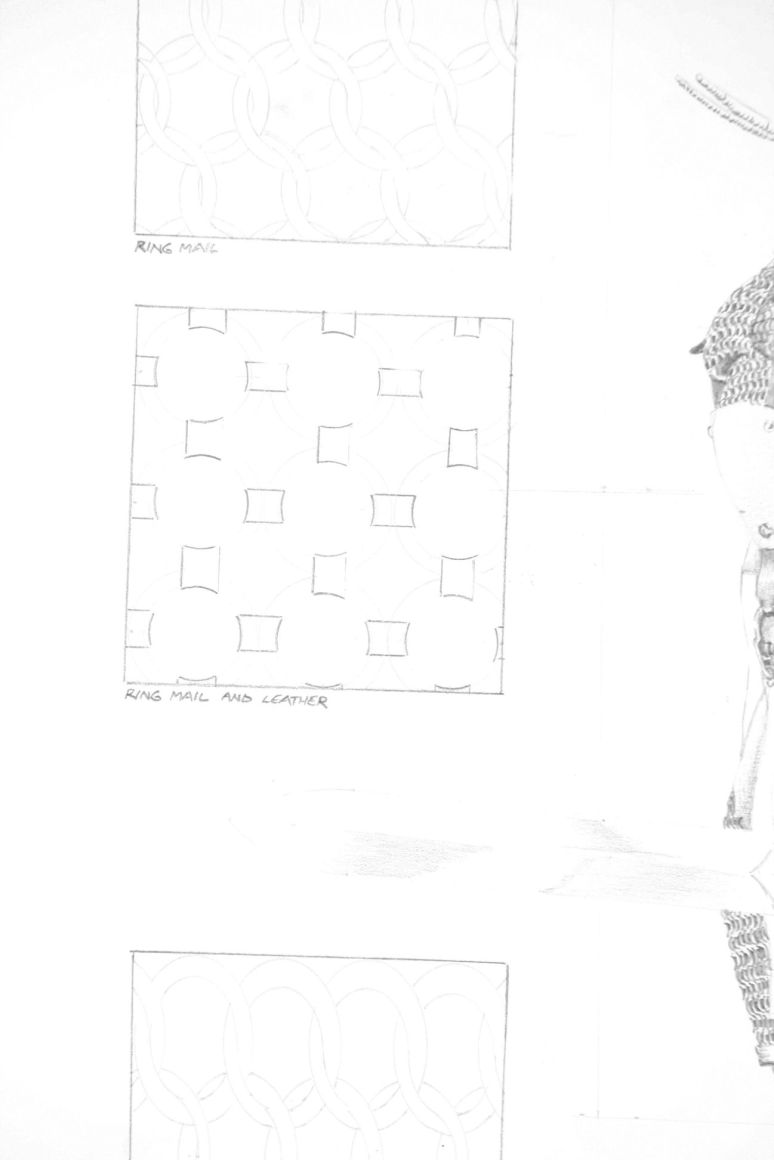 In high school, I used Canteor in a small amateur comic book series I called Hydra’s Tale but not much really came of the character.

In 1993, I was doing a lot of wildlife art and it was starting to upset me that I didn’t seem to be creating too much sci-fi and fantasy work anymore. I was actually feeling like I had lost my edge for those genres due to a lack of practice. Like a writer’s block but with regards to very specific types of illustration instead. I was also at a particularly angry point in my life–one of many.

I was upset about being stuck in a factory job while building my art career, and facing negative rumors and behaviours that had surfaced between some of my relatives, other family members I loved, me and Kim who was my live-in girlfriend. I no longer had time to continue my martial arts practice in an actual dojo, and I became painfully aware of hypocrisies at my church, which lead me to refuse continuing to attend. I felt like I was constantly at war with the world, yet more so with myself because I was always trying to be sympathetic and empathic to everyone else’s needs and feelings while very few actually seemed to care about me.

I’d catch myself brooding, and get more crossed with myself for being so self-indulgent. I’d tell myself to stop being so feeble-minded, get some backbone; stop worrying about everyone else for a change, and start fixing my own life. Very aware of how peculiar this psychological stagnance was, I wanted to express it through my art, although I had no idea as to what purpose.

As illustration is such a colossal part of my existence, I decided that clearing out the old images in my portfolio to create new works, mainly for my own pleasure, could be a start to a renewed life. I actually found artistic inspiration by doing that because I wound up pulling out that controversial 8.5×11″ sketch of Canteor that I had forgotten about for so many years. I sat there in front of my drafting table with my portfolio leaning on my left leg just staring at the sketch for probably two or three minutes. I realized how I was going to express myself. Who I am, was going to be illustrated in this next piece, and it was going to not just tell my story but that of all others who feel like I felt at some point in their lives. A sense of excitement that I hadn’t felt in a long time was welling up inside me. It had begun.

Both compassion and strength needed to be conveyed in this image. I don’t like associating notions like sensitivity, honesty and toughness with gender as I find many people do so I wanted to eliminate the male gender of the character. I found this to be an impossibility for this robust fantasy character. No matter what, the new Canteor was going to appear male (the attempts to neuter this figure is not my earliest considerations for creating the fictional Gïpan species of Rädën but it’s definitely the first practical attempt). I had no choice but to accept it and move on to finding something else to eliminate.

Race played an awkward factor in the birth of the original Canteor. I was determined to make sure that the new hero would not be a victim of racial bias. Already certain that I was going to make the final drawing a graphite image, I thought I could use the pencil to may advantage so that no one could determine for certain what skin complexion that the new Canteor would have.

A lover of anatomy studies and cultures, I tried to give him a mishmash of racial characteristics instead of attempting to eliminate archetypical features that would cause one to say, “Oh, he black,” “white”, “Asian,” “Spanish,” “German,” etcetera. The bridge of the nose, perhaps at first seeming like that of any other nose, was intended to be part Mohawk Indian, Dinka tribesman and something else that I can’t remember. The bottom lip is everted and Negroid. The top lip is shallow like that of perhaps many Caucasians. The left corner of the mouth is abnormally elongated to help give a mainly neutral and subtly serious facial expression. The eyes were shaded and highlighted to make it difficult to determine if the character’s iris colours are brown, blue, green or something else if the illustration were to be made in colour. The eyelashes are full, dark and nearly fit a feminine stereotype. One of my last-ditch attempts to make the character gender neutral. The left cheek is high and bony, emphasized by unrealistically heavy shading to the rear. Members of any human race or ethnicity could have cheekbones like that. They connect to a broad, partly concealed jaw-line that is difficult to tell if it is clenched or not.

Canteor used to stand with his head tilted forward while looking up with a menacing glare. In the new rendition, I planned for the character to hold his head up proudly, even defiantly. His gaze was still to be held directly ahead of him at something far beyond the left edge of the stock I drew him on. He contemplates his future and the adversity lying ahead. He’s setting lofty but reachable objectives, and planning how to best fight through the obstructions. His white helmet with ram’s horns and antelope’s antlers remained the same, but the rest of his garb has been stylized somewhat differently.

To show more muscle, an obvious sign of strength, I decided to turn much of the chainmaille into a skimpy cut-off t-shirt. The large breast-plate was to become a small shield riveted to the shirt to protect his solar-plexus and upper abs. The abdominal plate was to also serve as a means to suspend a primitive loincloth and help hold up the chainmaille leggings on the lower extremities. 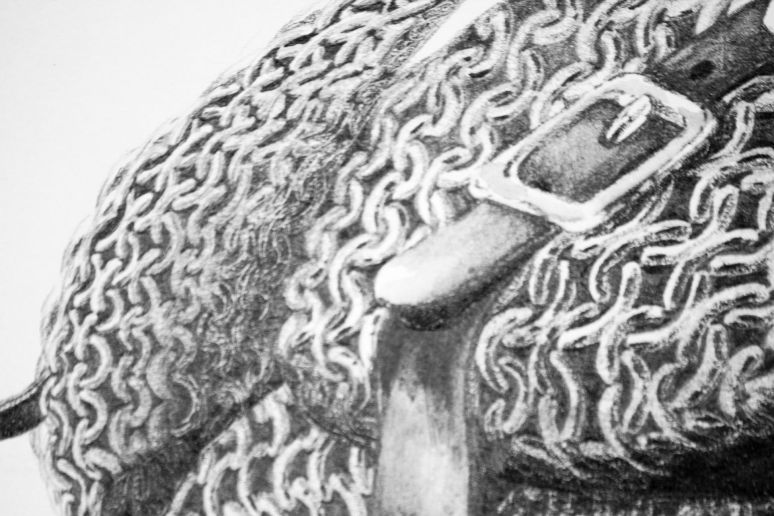 Chainmaille pants are just not done (a person who can sit straight in something like that is a person who must dig pain). A long coat of maille was worn by medieval warriors to protect the thighs, groin and buttock areas. This is fantasy art, however, and a time to get stylish. An avid street cyclist back in the 80’s, I thought of biker shorts. Biker shorts made of maille. But I like to show flesh in my fantasy art. Using imagination is good but too much maille leaves too much to the imagination. I decided to heavily crop the shorts while making a truly final attempt to neuter Canteor by adding a decidedly feminine trait to his bottoms. Women’s lingerie is so inspirational. His scalloped biker shorts were to be held up by leather straps worn like stocking suspenders (this was also a last attempt to try to neuter the figure). Canteor ceased being Canteor the roll playing game character. Now he was a nameless representation of me, and all others around the world who might identify with me.

Apart from the new rough drawing, I sketched some chainmaille linking patterns to figure out which one was going to be best for the look of the final image. At this stage, I put the drawing away, and didn’t take it out again until 1995. I don’t know why I did that. It just seemed to be the right thing to do. When I finally picked up my pencil to make the final drawing, the work came out of me like I had a sudden rush of adrenaline. Ever since then, my outlook on everything I do in life has been extremely goal oriented and less suffocated by aspects of life that I need not allow myself to get bogged down by. I am a little more regimented and logical. Perhaps like a soldier.