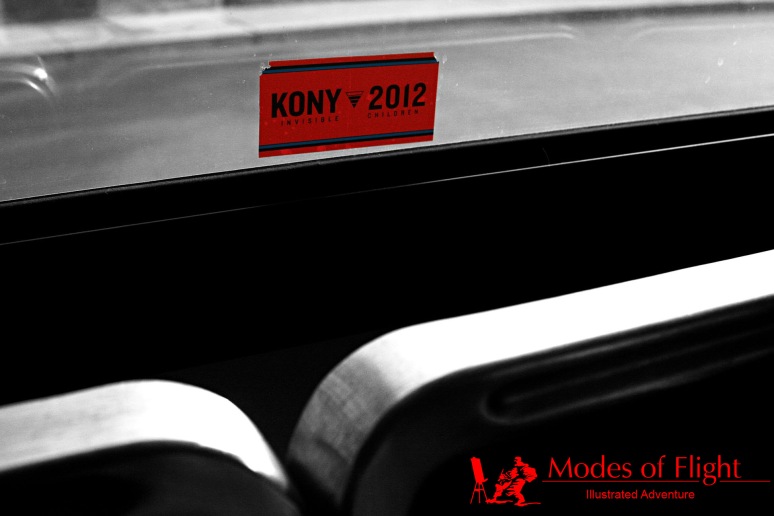 Although it is such a little sticker on a city bus window this, to me, is a fine example of when street art is used to affect social change in a positive way.

I made this shot just as the controversial “Stop Kony” campaign began to quickly gain steam over the Internet as a result of Jason Russell’s viral video Kony 2012.

In my mind, this campaign is the most important internationally unifying social justice movement, and biggest news event of 2012, even though it was treated like a fad by the middle of the year.

While Invisible Children Inc.’s ambitious goal of ensuring the arrest of terrorist cult leader Joseph Rao Kony by the end of that year failed to be realized, it is clear events that have such immediate global impact for change are quite rare. Unless I’m mistaken, the hunt for Joseph Kony is on a level comparable to the Tiananmen Square protests of 1989, the last eight tumultuous years of South African Apartheid, and the hunt for Osama bin Laden.

It doesn’t matter that Kony wasn’t caught by the end of 2012, as hoped. It doesn’t matter if the “Stop Kony” movement has the earmarks of slacktivism. Therein remains the undeniable facts that Kony is the architect of a faction that creates and fully exploits child soldiers, and child sex slaves. He is a monster, his cult is a physical embodiment of hell on earth. The effort to try this creature in the ICC is necessary and must be supported until the day that Kony is either brought to justice or dead.

Even little stickers like this can help keep the movement alive in the collective consciousness of the caring world.