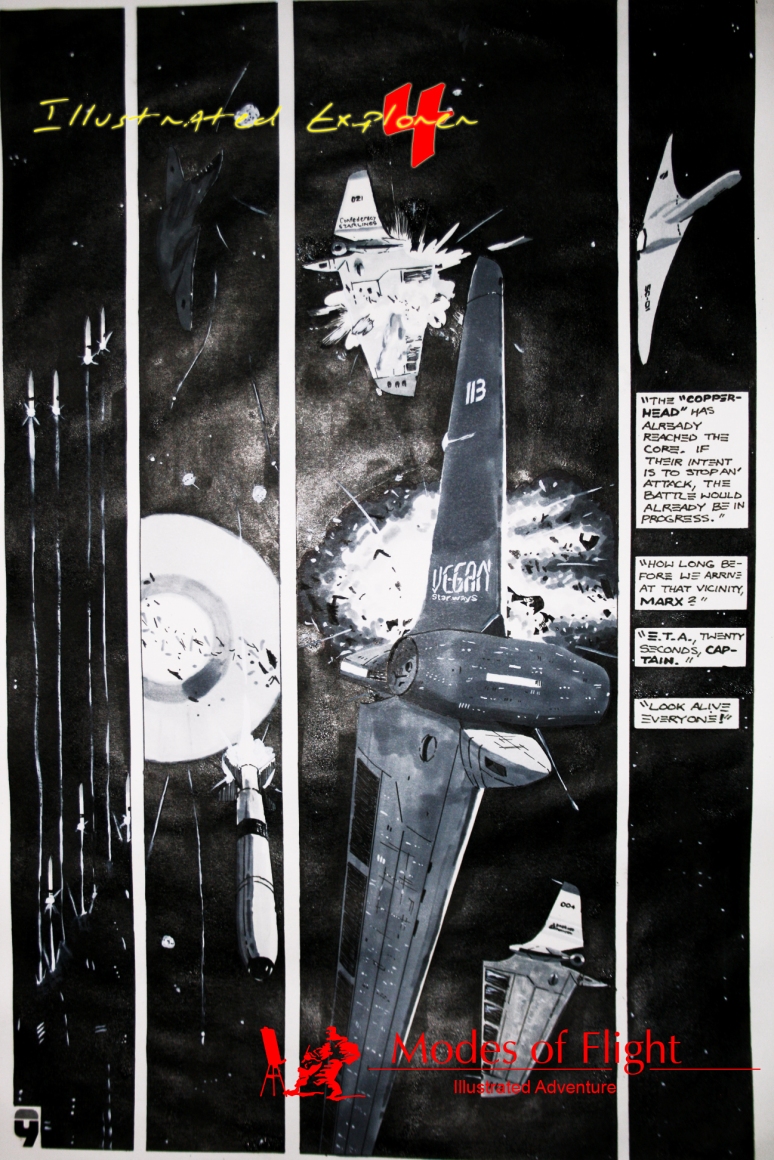 Panels on page 9 of my old action-adventure comic.

This is why I started this blog series. To rediscover this 2D aspect of figurative illustration, and share the process of rediscovery with anyone interested. This is me getting back to my artistic roots.

Everyone on the planet has seen many examples of figurative illustration whether they are familiar with the term or not. Figurative illustrations (FI’s) have likely been created since ancient civilizations have been trying to comprehend, construct and mimic the physical shape of things. FI has been steadily refining ever since.

Just to thwart a common misconception. FI is technically not the same thing as figure drawing or figure painting. The latter two are recognized as fine art as opposed to commercial art, and exclusively involve depictions of the human form in all realistically possible postures and making all realistically possible gestures. The commonality between the latter two and the commercial art of FI is that they all frequently feature the human form. FI; however, is not limited to the human form. It includes representations of animals and inanimate objects of all shapes and sizes.

That word representation is important in the description of FI because it indicates that the free expression of human imagination can play a critical role in the creation of artwork. Through FI, I can illustrate something fictitious. A fictitious world full of fictitious landscapes and fictitious cities inhabited by fictitious creatures that utilize fictitious technologies.

Obviously from this realization, it is representation in the visual arts that give way to the development of narrative art that I love so much. Narrative art is artwork that tells a story either through a single piece of artwork or a series of pieces — either an entire story, more than one story or part of one story. Anyone who has enjoyed reading a comic book, the work of Beatrix Potter or looking at paintings by Peter Paul Rubens (fine art) or Jacek Malczewski (fine art again) has an appreciation for narrative art and FI. Anyone who has made a comic book, comic strip, fine or commercial art drawing, painting, photograph or sculpture that tells a story about anything representational has created narrative art and FI.

I have always relished this genre of illustration the most. FI is my specialty as a 2D visual artist. This is the avenue in which illustration becomes most imaginative, expressive and liberating. As you can probably tell by now, FI also has the highest potential of producing either commercial art or fine art.